A study of genes has people considering what, on the face of it, seems like something out of a bad sci-fi movie.

A study in Proceedings of the National Academy of Sciences has people seriously considering what, on the face of it, seems like something out of a bad sci-fi movie: that humans might be able to develop venomous spit.

According to the study’s authors, the genes that produce toxic proteins in snakes (i.e., venom) behave similarly to those of mammals, providing “the first real solid evidence for the theory that venom glands evolved from early salivary glands.” In other words, we share the same biological capacity to produce oral venom that snakes do.

That doesn’t mean we’ll be spitting venom anytime soon, or ever. Just because our saliva has the capacity to mutate into venom over time – a mutation that can be passed down from generation to generation – doesn’t mean it will. For that to happen, there’d have to be a selective advantage for humans being venomous, and for us to develop a truly potent venom that advantage would have to occur (or get stronger) over millions of years. Not to mention the entire physiology associated with venom production (e.g. fangs), which would have to co-evolve in concert with humans’ salivary systems.

A more recent study demonstrated just such a road block, inferring the evolutionary mechanism of venom duct formation and implicating small wrinkles inside the base of fangs as the precursors to the venom delivery system. These wrinkles, or infoldings of the dentine, are called plicadentine and do not occur in mammalian teeth, having only been documented in fishes and lizards.

While the idea of humans evolving venomous spit may seem far-fetched, the underlying science reveals a key truism about the nature of venom – and, it follows, the production of antivenom designed to neutralize its effects.

Venom is complex and fast evolving

Trying to understand the evolution of snake venom is no simple feat: the unique mixture of 20-25 toxins that comprise venom are incredibly complex. That’s why instead of studying the toxins themselves, the study’s researchers looked at the genes instrumental in producing them.

It’s this complexity that also explains why “venomics” – the science aimed at better understanding the composition of venom – is so vital to the development of antivenom. Each snake has a unique “venomic fingerprint” that is determined not only by species, but diet, climate, geography, age, sex, and health of the snake. That’s why the World Health Organization guidelines state that the ideal and most effective antivenom should be derived from snakes that are representative of the snake population living in the area where the antivenom is being used.

Using the venom proteins of snakes local to where the antivenom will be used helps to generate the antibodies necessary to treat the range of envenomations that patients might suffer. Our process, for instance, uses venom from four species of pit vipers native to the US to generate four sets of antibodies that are affinity purified and ultimately blended into a single antivenom. Crucially, we periodically refresh this cross-section of snakes to ensure our sample takes into account a representative mix of venom proteins one might encounter across the entire range of the species for which our antivenom is indicated – all U.S. pit-vipers (i.e. rattlesnakes, cottonmouths and copperheads).

Venomics may not be as exciting as the possibility of venom-spitting humans. But in a world where an estimated 5.4 million people are bit by snakes each year, understanding the toxic proteins that make up snake venom continues to be critical in providing the therapies needed to safely and effectively treat it. 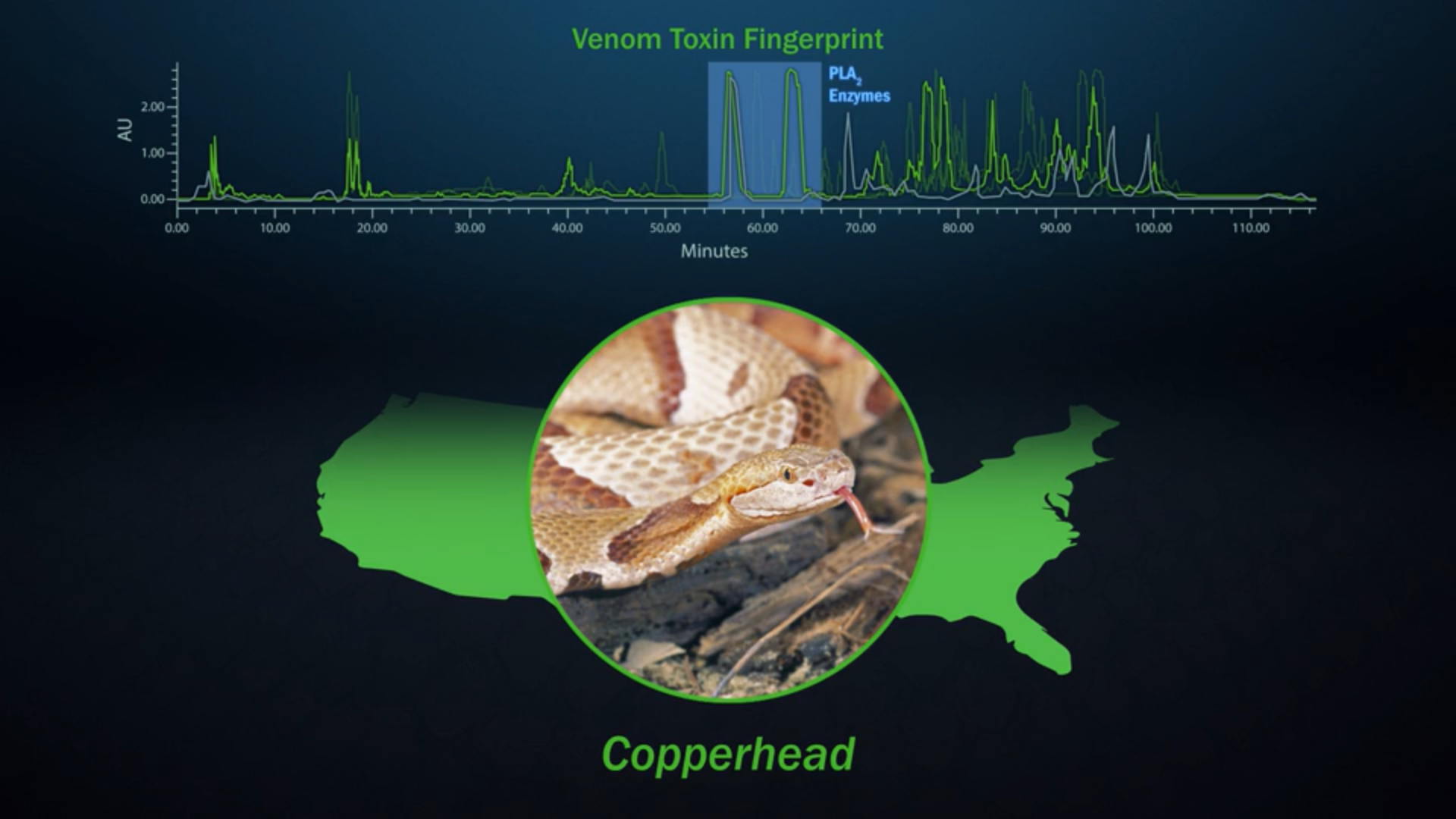 Watch this video to learn how antivenom works and why we have selected the four species of snake used in our process.